Designed by Anthony de Francisci, the Peace Dollar was so named because the word PEACE appears on the bottom of the coin’s reverse.

After a six-year pause in minting, the Peace Dollar was again minted in 1934 and 1935.  The Peace Dollar is the last silver dollar minted for circulation in the United States prior to the American Eagle, beginning in 1986.

Anthony de Francisci’s design featured his rendition of Lady Liberty on the obverse.  His wife, Teresa, was the model for the sculpture.  The coin’s reverse featured a Bald Eagle holding a broken sword, symbolizing peace.  This design was interpreted as one of defeat, rather than peace, so Chief Engraver Morgan altered the design to replace the sword with an olive branch.  The eagle is perched on a rock, facing a group of the sun’s rays. 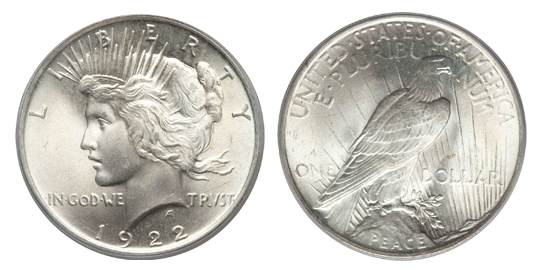