You are placing a quick quote request for the following product:
International Bullion Exchange > Resources > Why Own Gold?

Since 1913, when the United States Federal Reserve was created by Congress, the dollar has lost 96% of its purchasing power due to inflation.

A common misconception today is that prices for goods and services have been going up. The truth of the matter is that prices have remained nearly the same in precious metals terms; it is the value of the dollar that has declined.

It simply takes more and more dollars to buy the same products, since the dollar’s value has become worth less and less.

When gold and silver were scrapped as a “control” mechanism for the US economy, the US began circulating a “robust paper” in place of real money. This “robust paper” is now the world’s reserve currency and the mainstay of central banks around the world. From 2002 – 2008, the U.S. Dollar lost over 60% of its value versus the Euro, and had similar losses against other major currencies. Since the dollar is the principal reserve currency for the world’s central banks, that means central banks have lost nearly 60% in the value of their holdings. It is no coincidence, therefore, that since year 2000, Gold prices have gone up over 350%.
With exploding deficits in the US and other G8 countries, one needs only to look at history to find that governments when faced with huge amounts of debt ultimately print massive amounts of new money and inflate their economies so they can pay off their debt with cheaper dollars, sterling, Euros, etc. Historically, as paper assets have collapsed in value, gold and precious metals have skyrocketed in price. 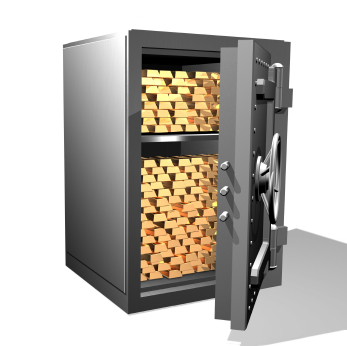